How Long Does THC Stay In The System? 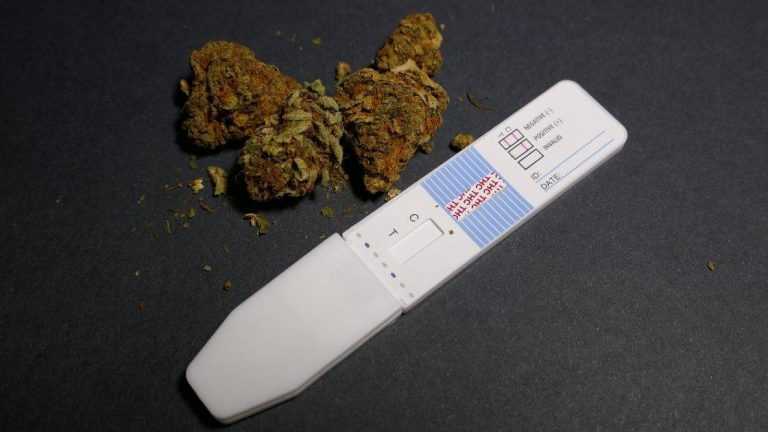 THC can still be detected 90 days after marijuana use through hair, three days to a month in urine, 48 hours in saliva, and 36 hours in blood. But its detection in the human body depends on many factors such as: how much body fat a person has, how often they consume the drug, how much someone smokes and the drug test sensitivity.

How Long Does THC Stay In The System?

Until When Is THC Detectable Via Drug Testing?

Drug tests measure metabolites or the end products of weed after it gets metabolized. They remain in the human body for quite some time. However, tests have varying timeframes in which they can detect marijuana.

Cannabis metabolites are fat-soluble; they bind to fat molecules in a body. It is the reason why it takes a longer time for traces of metabolites to exit the body. Weed becomes detectable in the blood within minutes after inhalation. Even after metabolization, metabolites stay in the bloodstream for days.

However, only smoking and ingesting weed makes metabolites present in saliva. Exposure to smoke will not. It takes a long time for cannabinoids to exit through the hair because it grows slowly. On average, hair grows at 0.5 inches per month. A 1.5-inch hair sample is enough to reveal a 3-month history of drug use.

Based on a 2017 study, the estimated window period for a drug test to detect marijuana use is three days.

Someone who smokes marijuana for the first time may show up traces even after three days. For someone who uses weed for 3-4 days a week, the window period should be around 5-7 days. Meanwhile, for chronic users or people who smoke weed at least once a day, tests may detect traces as far as 30 days or longer.

Factors like dosage, frequency of use, genetics, fat content, and metabolism will also play a role in keeping marijuana in a body.

Standard tests can detect higher doses of THC. But some tests are sensitive to detect even the lowest concentrations. Of course, the dosage intake of a person affects how well the test will read traces of the drugs. Take also into consideration that the effects of THC are cumulative. Someone who smokes frequently is likely to test positive.

Cannabinoids are fat-soluble. It means that people with a higher body fat content may metabolize THC more slowly. If you think exercising and being active in general will help your body metabolize THC, think again. Exercising before a test might increase THC concentration in the body. It is because exercising helps fat cells release THC into the body.

Dehydration is also one factor that might increase THC concentration. Although drinking lots of fluids before a test will not affect the test results, dehydration might flip a switch. For those on the borderline of a positive and negative outcome, it may cause your readings to end up reading as positive. Remember to keep yourself hydrated at all times.

How Does The Body Process Marijuana?

Most tissues and organs absorb THC after it enters the bloodstream. But fat cells and the brain absorb THC the most. It takes about 10-30 minutes before the effects kick in. On average, it lasts from 2-8 hours based on the amount of marijuana used.

After a few minutes of smoking weed, the smoker’s heart begins beating rapidly. The bronchial passages relax and enlarge alongside the expansion of blood vessels. The result becomes noticeable as the person develops blood-shot eyes. A person’s heart rate, 70-80 beats per minute in general, might gain an additional 20-50 beats per minute. The effects could be more intense if the user took in other drugs at the same time.

When THC enters the brain, it causes a euphoric feeling on the user. The substance attacks the brain’s reward system. It is a region in the brain responsible for the release of dopamine. Dopamine is a hormone that controls how we feel towards pleasure. It is also responsible for how we think and plan. THC from weed triggers the neurons that produce dopamine. It acts as a stimulus interacting with the user’s brain. The reaction results in a combination of good and bad effects such as high libido, anxiety, increased energy, and mania.

A marijuana user’s mouth can also feel dry and might feel sudden hunger and thirst. Other than that, as soon as the effects wear off, there will be a sudden feeling of sleepiness.

According to a study in 2012, it takes 12 hours for women and 15 hours for men to metabolize weed. THC exits the body through human waste such as feces (65%) and urine (20%). Most substances make it out of the body within five days.

How Do You Beat A Marijuana Drug Test?

Workplaces have imposed mandatory drug testing for new employees and random drug testing for current employees. Most of the time, give these out on short notices. If you’re a constant user of weed, you would likely fail the test. Termination can be the highest sanction an employee could receive for failing.

Although there are several tips on beating a marijuana drug test, most are only urban legends. Some of it includes washing the system out with water. As mentioned above, fluid intake does not change the THC concentration in the body before a drug test. Even if this article busted the myth, it still pays to keep yourself hydrated, regardless if there is a scheduled drug test or not.

Drug screening agents are also a popular way to evade a drug test. There are detoxification kits that help people pass urine tests which consist of goldenseal, vinegar, niacin, Vitamin C, or herbal tea. What they do is speed up the metabolism of a body for quicker THC excretion. However, screening agents only make the process faster. But they do not eliminate metabolites out of the body.

Other attempts in evading a drug test include masking urine samples using chemicals such as salt or bleach. But because of developments, urine integrity tests can detect masking agents like compounds found in weed, such as cortisol. It can also test temperature, pH, color, gravity, smell, and urine dilution.

Urine test adulterants may work, but they are not 100% foolproof. The only reliable way of passing a test is to stop smoking or ingesting marijuana or cannabis products.