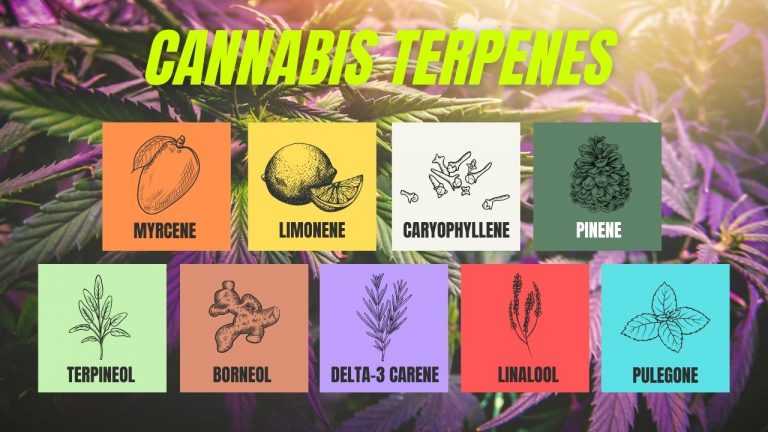 Terpenes are chemical compounds in plants and even in some animals. They are the reason behind the aromas, flavors, and even colors associated with different crops. When it comes to Cannabis, terpenes make certain strains smell or taste different from others. It plays a vital role in distinguishing the effects of different strains of Cannabis. Some terpenes will help you relax and relieve any stress, while others can promote concentration and alertness. Thus, terpenes are viewed by most consumers as a way to classify cannabis products and predict their effects, scent and flavor.

How to pollinate cannabis?

Why does the plant produce terpenes?

Plants produce terpenes to protect themselves from herbivores, insects, and other environmental hazards. Its existence in Cannabis helps the plant repelling predators. In addition, they are also responsible for regenerating and supplying oxygen to a plant.

What terpenes can be found in Cannabis?

Where can we find terpenes in a cannabis plant?

If you take a closer look at your Cannabis, maybe you have noticed the tiny glandular hairs that surround the area of the cannabis plants, which gives crystalline shine and a sticky feel. We call this part trichomes which are responsible for the production of terpenes. It contains resin glands that produce terpenes.

Do terpenes make you high?

Terpenes cannot cause delusions, paranoia, drowsiness, and other psychogenic effects. In short, it would not make you feel high. Instead, terpenes are known for their medicinal use, especially in mitigating hypertension, diabetes, and depression.

How do terpenes differ from Cannabinoids?

Cannabinoids are known chemical compounds that are found in Cannabis. Cannabinoids, like THC or tetrahydrocannabinol, stimulate receptors in the endocannabinoid system of our body. Thus, resulting in the "high" effect that users may experience, such as delusions, paranoia, drowsiness, etc.

However, not all Cannabinoids stimulate a "high" feeling. Cannabidiol or CBD is another type of Cannabinoids that is popular because of its medicinal use. Though CBD acts on some of the same receptors in our endocannabinoid system, it does not create any euphoria.

On the other hand, terpenes are responsible for the smell and aroma produced by Cannabis. It makes certain strains smell or taste different from others. Both Terpenes and Cannabinoids act in our endocannabinoid system. People believe that terpenes provide an entourage effect or enhance a person’s "high" feeling from using Cannabis. In short, it improves or alters the effects of THC and CBD when intake by our body.

How do terpenes affect the human body?

One of the notable effects of terpenes on the human body is it helps the person’s mood and stress levels. The vibrant smell terpenes produce eventually becomes the basis of many essential oils aroma to alternative therapies such as aromatherapy. In addition, terpenes can also lessen the effect of a person who gets "high" from using Cannabis. This is known as the entourage effect. It implies that terpenes can alter the impact of Cannabinoids which is the chemical compound responsible for the "high" influence of Cannabis when consumed.

How to maximize the benefits of terpenes?

With the known benefits of terpenes, especially their therapeutic properties, you have to make sure that you maximize the advantages you are getting from them when you purchase Cannabis products.

Terpene is the compound that provides the aroma and scent of your Cannabis. It helps your Cannabis for adaptive purposes to survive. Terpenes hold therapeutic properties that are beneficial to your body. Researchers must explore more of the potential medicinal uses to widen the understanding of terpenes.