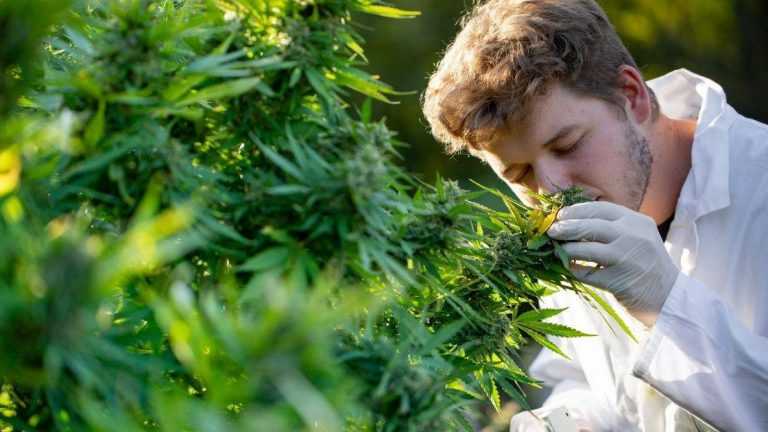 Compounds like Terpenes and Terpenoids cause the plants to smell. In some instances, marijuana could smell as far as a mile from the source.

When Do Cannabis Plants Start To Smell?

Weed starts to smell as early as 3-6 weeks after germination. The leaves produce scent but not as much as the flowers and buds. In some instances, weed could start to smell in its 3rd or 4th week.

In What Stage Do Cannabis Plants Smell The Most?

Weed smells the most during its flowering stage until its harvest. However, it is best to take note that even during the curing and drying process, weed still smells as strong as its flowering and harvesting stage. Added to that, the number of plants that you have would contribute to how strong the smell would be. Bigger plants also smell more than the plants that are shorter.

Why Do Cannabis Plants Smell?

The scent people smell from cannabis plants is a mixture of complex chemicals. Chemicals called terpenoids and terpenes make up the scent.

Terpenoids cause different alterations to some characteristics in plants. This complex compound contributes mostly to odor, but it also contributes to a plant’s coloring. For example, Terpenoids are responsible for the Yellow pigment in sunflowers as well as the Red pigment in ripe tomatoes.

Terpenes are organic compounds produced by both plants and animals. This compound has a strong odor as it is used to protect the source from predators that might prey on them. In terms of scent, Terpenes could be compared to notes. These are the subtle hints of smell found in a base scent. It adds character to the scent as well as its own distinction. For a better explanation, here’s a YouTube video to help you out: